Show Set for May 27-29, Genoa, Italy The next (12th) International Tug & Salvage Exhibition will incorporate the Genoa Workboat Show, bringing two exhibitions under one roof at the international fairground in Genoa, Italy, May 27- 29, 1992, during the gathering of executives involved in the tug, towage and salvage business. This combination greatly enlarges the scope of products and services on display, and also serves to provide the widest possible appeal to trade visitors.

The International Tug & Salvage Exhibition has been held biennially all over the world during the last 20 years. Well over 3,500 executives involved in the tug and salvage business have attended these events which have been held in London, Vancouver, New Orleans, Rotterdam, Hamburg, Singapore, Sydney and Halifax.

Thanks to the unique combination of "two fairs under the same roof," the Genoa Workboat Show will be a showcase for anyone involved with commercial craft and associated equipment or services with a vast range of products and services directly relevant to owners, operators or users of small and big commercial craft. Many boats will be available for demonstration to allow the visitors to view and test a prospective purchase. The show will present everything from winches to propellers, from radar to pumps.

Parallel to the Genoa Workboat Show/Tug & Salvage exhibition, there will be a series of new product seminars held by leading people of constructhe industry who inform the visitors of new technologies and development of the sector.

The 12th International Tug & Salvage Convention, one of the world's largest gatherings of senior executives involved in the tug, towage and salvage industry, will take place in Italy for the first time, at the Grand Hotel Miramare, Santa Margherita-Portofino.

The convention papers, delivered by highly qualified speakers from all over the world, will cover specific marine salvage topics as well as traditional tug-related subjects.

Simultaneous English/Italian translation will be available, and preprints of the papers will be sent to registered delegates well in advance of the convention in order that they may have a chance to study them and prepare questions.

Speakers will give a resume of their papers, and an equal amount of time will be given over to discussion.

The recognition of the Genoa Workboat Show as a show of prime importance is demonstrated by the active participation of the Port of Genoa and the National Passengers Transport Association, gathering the main Italian companies who operate in this sector.

As an integral part of the convention there will be a full social program to which delegates' partners are invited. 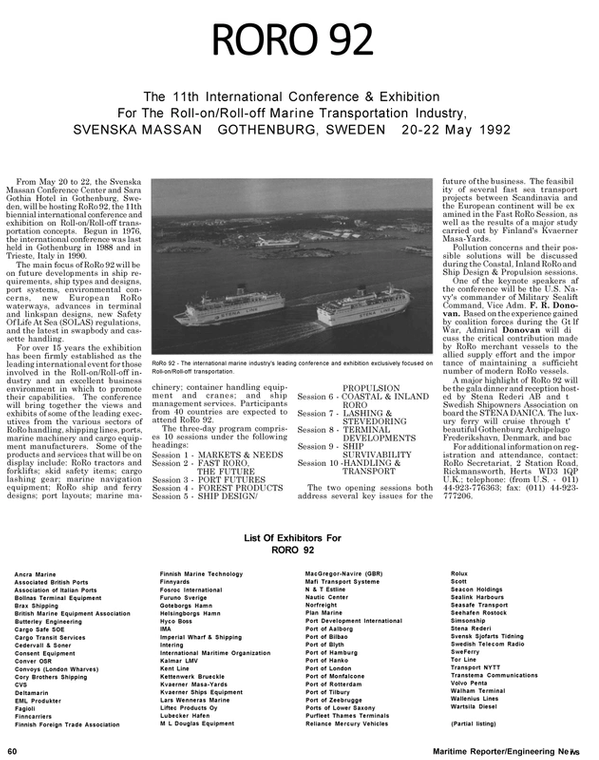