The Heron is constructed entirely of glass reinforced plastic (GRP) to a design first developed for the Italian Navy Lerici Class minehunters.

The technology was transferred to the U.S. Navy Coastal Minehunter Program under a unique arrangement managed by Intermarine USA, a subsidiary of Intermarine SpA, a Ferruzzi Group company.

Among the dignitaries in attendance were Georgia Senator Wyche Fowler, Boris Biancheri, the Italian Ambassador to the U.S., and several senior-ranking U.S.

The ship's sponsor was Mrs. Leonard McRoskey, wife of the former Deputy Assistant Secretary of the Navy for Reserve Affairs.

The ship is a larger version of the successful Lerici Class Italian Minehunters that were so effective in the Persian Gulf mine clearance during Operation Desert Storm. The Heron is 188 feet long, 890 metric tons in weight and built entirely of flexible and resilient fiberglass to ensure her survival in the event of a close mine explosion. Her crew of 51 sailors will search for mines with a high definition, variable depth sonar and neutralize them with a remotely controlled robot submarine. Systems on board include the Raytheon minehunting sonar AN/SQQ-32 and Alliant Techsystems mine neutralization system.

Propulsion for the vessel is provided by two Isotta Fraschini 8V AM ID36 amagnetic diesel engines, rated at 800 hp each at 1,800 rpm, and two Voith-Schneider cycloidal propellers.

Heron is the second ship of the Osprey (MHC-51) Minehunter Class. The design integrates modern mine countermeasures technology proven in the Persian Gulf into a unqiuely designed platform with exceptionally low magnetic and acoustic signatures to protect against mine detonations during minehunting operations.

Heron will be commissioned by the U.S. Navy and join her sister ship Osprey following an extensive test and trials program in 1993.

The program to transfer Italian designer and construction technology to U.S. Navy Mine Warfare shipbuilding programs began in 1986 with the award of a design contract to Intermarine SpA. Intermarine USA was established in 1987 to build these ships for the U.S.

Navy. The construction contract for Heron was awarded to the company by the Naval Sea Systems Command in 1989.

For free literature on the boatbuilding services of Intermarine USA, Circle 28 on Reader Service Card 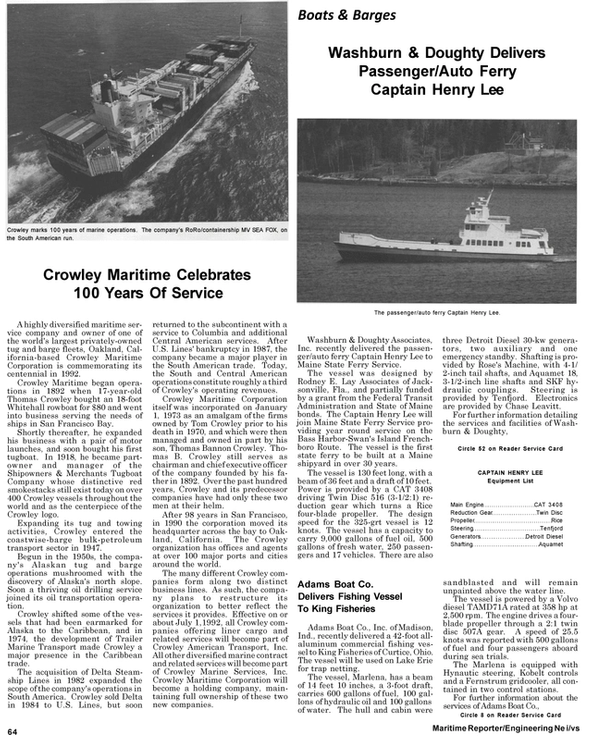