The U.S. Coast Guard is attempting to establish federal oil spill regulations that realize the concerns of the nation's coastal states, thereby avoiding a host of individual state spill laws.

While addressing the International Association of Independent Tanker Owners (Intertanko) in Genoa, William Holt, chief of the Coast Guard's Marine Environmental Protection Committee stated that his agency intends to "enact sound, strong federal rules so that states will not feel compelled to act on their own." Acting on their rights under the 1990 Oil Pollution Act, most of the nation's 24 coastal states have already instituted strict oil spill legislation, including unlimited-liability, clean-up response and prevention statutes.

Draft rules for vessel response plans will be published only after discussions are first held with interested industry groups, such as tanker owners and operators. This is the first time that the Coast Guard has ever subjected prospective legislation to public scrutiny before making it official.

"We hope to use our decades of experience in the pollution prevention field to provide an example for the states, so that if they decide to enact rules, they will follow our lead and reflect the federal regulations," stated Mr. Holt.

After the Coast Guard's new set of rules are published on August 18th, companies will have six months to submit their oil spill prevention and response plans, or they will risk being banned from trading in the U.S.

The arrangements will probably include designating a company official with the full power to authorize oil clean-up operations, an active contract with a shoreside firm for the handling of large oil spills and submitting to the Coast Guard a workable oil spill response plan that details emergency equipment, personnel and their training.

At the Intertanko meeting, Mr.

Holt was instructing tanker owners on how to prepare for the new regulations in order to stay in the U.S. oil trade. 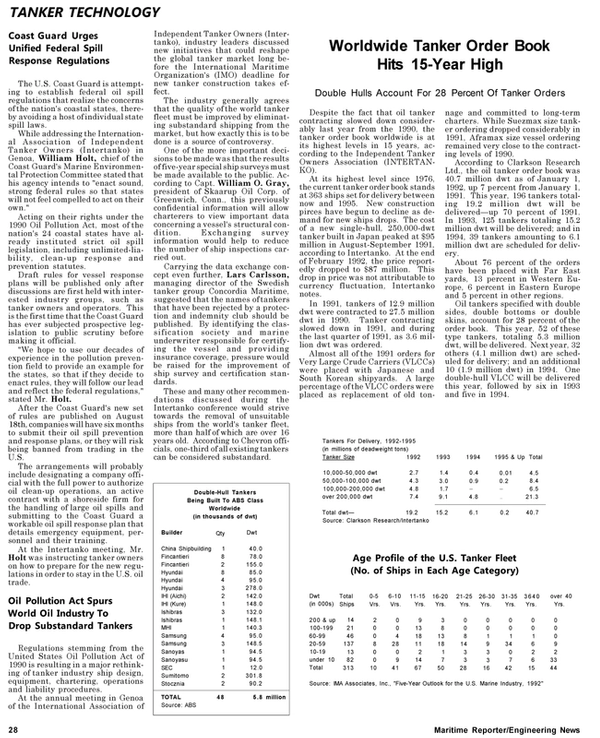