New Generation Crude Carrier One of the first U.S.-owned tankers built in the world to conform with the Oil Pollution Act of 1990, the 95,000-dwt Patriot was delivered earlier this year to Conoco Shipping, a subsidiary of Du Pont.

The Liberian-flagged Patriot, which has already carried her first cargo from Venezuela for Exxon, has an overall length of797 feet, breadth of 137 feet and designed draft of 40 feet. Main propulsion is supplied by a single Sulzer 6RTA62 diesel engine, with a nominal continuous rating of 13,500 bhp, burning about 40.2 metric tons of fuel oil per day.

The engine's maximum continuous rating is 15,000 bhp at 104 rpm. Its specific fuel oil consumption at mcr during testing was 126.0 g/bhp/hr.

With seven crude tanks aboard, with capacities from 19,000 to 80,000 bbls, the Patriot can carry as much as 692,000 bbl. She also has two slop tanks and four pairs of water ballast tanks.

Her cargo tank structure was built to have a double-skin arrangement to protect the bottom and wing tanks in order to minimize the environmental pollution in the event of an oil spill. The Patriot's No.'s 1, 5, 6 and slop tanks were strengthened against the adverse effects caused under partial load conditions. Additional design features in the cargo tanks include vertically corrugated oil-tight and water-tight transverse bulkheads with lower and upper stores Classed by ABS, "+A1, (E), 'Oil Tanker,' +AMS, +ACCU, the Patriot has a bulbous bow, transom stern and a single continuous deck.

Samsung carried out numerical analysis, hull and wave pattern analysis and testing at Kriso in Korea in order to develop an optimized hull for the new generation Patriot and her sisters.

For free literature on the shipbuilding services of Samsung, Circle 112 on Reader Service Card 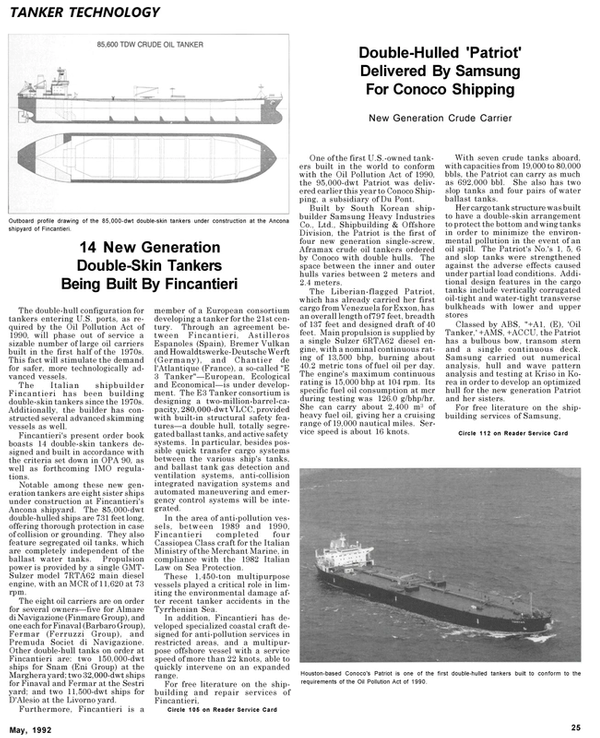 Read Double-Hulled 'Patriot' Delivered By Samsung For Conoco Shipping in Pdf, Flash or Html5 edition of May 1992 Maritime Reporter