Marine Safety International (MSI) and the Municipality of Rotterdam announced a joint venture to establish a world-class maritime research and training center in Rotterdam, the Netherlands.

The center, to be managed and operated by MarineSafety International Rotterdam B.V., will house six state-of-the-art electronic simulators.

They will be used for research related to harbor improvements and vessel safety as well as training of ships' officers, harbor pilots, cadets and vessel traffic controllers.

The joint venture document was signed by Dr. Rene Smit, Rotterdam vice mayor and alderman for the port, and Albert Ueltschi, founder and president of FlightSafety/ MarineSafety International.

Mr. Ueltschi commented on the long tradition of excellence his company has earned over its 40 years in the simulator training field. He said: "We plan to work with our friends in Rotterdam to make this center the focal point of maritime research and training in Europe and the world." Pieter Struijus, the Port of Rotterdam's executive director for shipping, noted, "The establishment of such an advanced center is in keeping with Rotterdam's aim of being an integral logistic transport center." The MarineSafety Rotterdam Center will be comprised of three ships' bridge simulators, two radar/ ARPA bridges and a multi-station Vessel Traffic System (VTS) simulator.

One of the bridge simulators will have a 360-degree field of view and be on a hydraulically driven motion base to simulate the effects of sea state on the ship.

The Rotterdam Simulator Research and Training Center will be located in the Port of Rotterdam and is planned to be operational early in 1993. 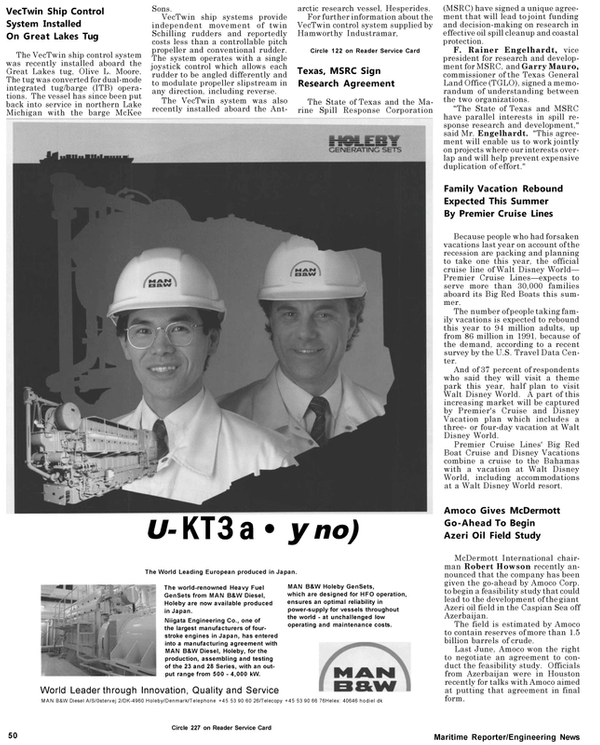