The megayacht-style vessel is being built for the Des Plaines Development Limited Partnership of Joliet, 111., and will begin offering gaming cruises on the Des Plaines River through downtown Joliet in the spring of 1993.

The new casino boat is designed as a Subchapter H vessel with U.S.

Coast Guard certification for 1,200 passengers operating on a protected water route. She will reportedly be the first Midwest casino vessel operated by a national casino company.

Owners of the vessel are a partnership composed of Harrah's Casino Hotels and John Q. Hammons, a major developer, owner and operator of hotel properties.

Founded in 1937, Harrah's is the gaming subsidiary of The Promus Companies, Incorporated of Memphis, Tenn., and the only casino company operating in all five major U.S. casino markets. Harrah's is the 80 percent general partner and Mr. Hammons is the 20 percent limited partner in the venture. Besides the casino boat, the $36 million project will include the construction of land-based buildings and a ship basin in downtown Joliet.

The casino will be located on three decks offering approximately 700 gaming positions, including 500 slot machines and 30 table games. The casino will be served by two elevators and stairways. In addition to gaming space, the new boat will feature a large dining area forward on the first deck and a lounge at the forward end of the second deck. The focal point of the vessel will be an atrium open to all three decks.

The vessel will be on a "fast track" construction, according to Tom Hensley, vice president of marketing for Service Marine. "We have contracted to deliver this boat at our shipyard in January 1993," he said.

Service Marine Industries, Inc., recently delivered a 600-passenger, 187-foot dinner boat to Spirit Cruises of Norfolk, Va., the fourth such vessel the company has built for this customer. Additionally, the yard has received another order for a 200- foot, 800-passenger dinner/ excursion boat from Premier Yachts of Chicago. Service Marine also has four paddlewheel-style and three yacht-style casino vessel designs, ranging in size from 645 to 1,600 gaming positions. 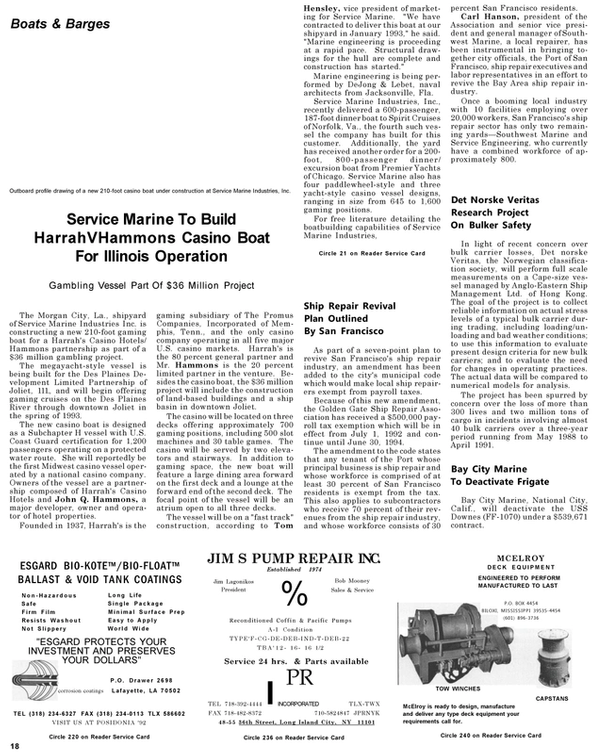