Trinity Industries, Inc., subsidiary Halter Marine, Inc., was recently awarded a $31.2 million contract by the U.S. Army to build two, 273-foot logistics support vessels (LSV) for use by the Philippines Navy. The contract also includes an option for a third vessel which could bring the value of the contract to about $47 million.

The announcement was made by John Dane III, president of the Trinity Marine Group. He said: "These new LSVs will be similar to, but not identical to five other LSVs recently built by Trinity shipyards for the U.S. Army. The Army version has bow and stern ramps for loading and unloading, while the Philippines ships will have only a bow ramp. The stern ramp space will be used to build temporary quarters for up to 150 people." These sealift/landing ships are designed to carry RO/RO cargoes as well as other cargoes directly to the beach and to landing areas that do not have docking facilities.

According to Mr. Dane, no external cranes or port facilities are required for the LSV to perform its mission, and only four feet of water is required for landing with a full load.

Construction of the vessels has commenced at Moss Point Marine, Inc., a sister shipyard to Halter in Moss Point, Miss. Delivery is scheduled for June and September, 1993.

The commercial design is modified to meet military requirements.

Mr. Dane said: "This non-developmental item (NDI) design approach makes the LSV cost effective by incorporating equipment proven by years of use and testing. The adaptability of the design also makes the LSV ideal for inter-island and commercial ferry service." The U.S. Navy and its Supervisor of Shipbuilding, Conversion, and Repair (SUPSHIPS) will be administering the Army contract. The ships will be built to American Bureau of Shipping (ABS) standards and will be classified ABS Maltese Cross A1 Circle E, Maltese Cross AMS, Maltese Cross ACC, and will meet Panama Canal and Suez Canal navigation regulations.

For more information about the services and facilities provided by the Trinity Marine Group, Circle 60 on Reader Service Card 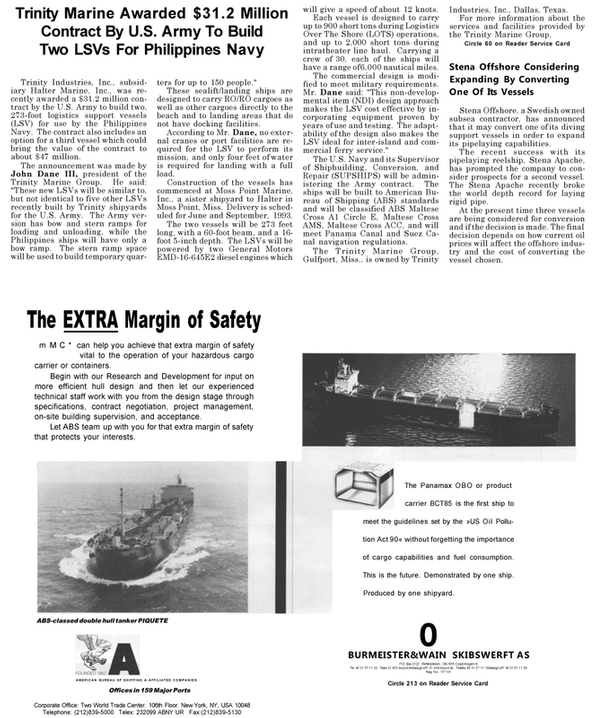